The Montgomery County Department of Transportation’s Division of Highway Services (DHS) provided special storm tree debris collections on County maintained roads in the the aftermath of the destructive derecho that occurred on June 29. The one-time collection was a special service provided to help residents with the massive clean up resulting from the storm.

Immediately following the storm, DHS sprang into action to clear blocked roads, but some streets remained closed for several days until PEPCO could remove power lines entangled in fallen trees.

Residents who still have tree debris to dispose may continue to bundle branches and tree limbs for County-provided trash and yard trim curbside collection or drop off items at the County’s Transfer Station. For information on cleanup instructions for fallen tree limbs, visit the Division of Solid Waste Services website.
at 9:38 AM

Montgomery County Executive Isiah Leggett celebrated the completion of a road repaving project that improved more than 43 miles on seven roadways using $6.7 million in American Recovery and Reinvestment Act (ARRA) funding. The funds employed 50 people; 47 by the paving contractor and three contract inspectors hired by the County. The selected roads were designated as high priority projects by the County’s Department of Transportation (MCDOT) because of their deteriorated condition. Overall, the County received nearly $168 million in ARRA funding for a variety of projects that have helped businesses get people back to work.
Joining Leggett were County Council President Roger Berliner, County Councilmember Craig Rice, Senator Barbara Mikulski, Congressman Chris Van Hollen, and State Delegates Charles Barkley and Jim Gilchrist.

The following were repaved:

The County also received other ARRA funding for transportation projects, including $1.75 million to the Division of Traffic Engineering for four projects to improve traffic flow and traffic and pedestrian safety and $6.55 million to the Division of Transit Services to replace existing buses with 12 energy-efficient, diesel-electric hybrids and one clean diesel bus. The buses have been in service since November 2011. Transit also received $350,000 to purchase new bid/dispatch software that is increasing efficiency in managing work assignments and daily dispatching.

Information about other ARRA funds awarded to the County is available on the County’s website.
at 9:26 AM

Email ThisBlogThis!Share to TwitterShare to FacebookShare to Pinterest
Labels: Projects

The Task Force is recommending that the rapid transit system be built in three phases over the next nine to 20 years to mitigate both construction and affordability issues. Leggett created the Transit Task Force in February 2011.

For highlights of the Task Force recommendations, see the County’s press release, read the full Transit Task Force’s report or view the MCDOT study of the concept.
at 9:19 AM

The Department of Transportation (MCDOT) began new road maintenance projects in local subdivisions in July and will add others in August. MCDOT will do full depth patching, remove the older road surface, and repave the roads with hot mix asphalt.
The following will be repaved, taking three to four weeks, depending on weather conditions:
MCDOT will conduct the following pavement preservation projects, in which crews conduct full-depth patching of deteriorated pavement, seal cracks, and apply a micro-resurfacing material. Timing depends on weather conditions.
MCDOT is also working to repair sidewalks, concrete curbs, and gutters at:
For more information on resurfacing projects throughout the County, visit the Division of Highway Services’ website.
at 5:22 PM

Email ThisBlogThis!Share to TwitterShare to FacebookShare to Pinterest
Labels: Projects

Construction began on July 20 to extend Dixon Avenue through the Bonifant-Dixon Parking Garage (Public Parking Garage 55) in Silver Spring. The Bonifant Avenue entrance to the garage will be closed for about 14 months.

Parkers are encouraged instead to use the Dixon Avenue entrance to Garage 5, which is bounded by Dixon, Ramsey and Bonifant avenues. The garage has 1,240 public parking spaces. Metro Kiss-and-Ride spaces are located on the G Level of Garage 5. 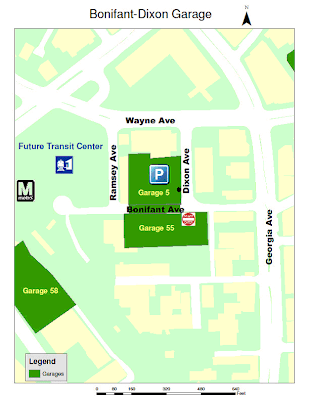 Email ThisBlogThis!Share to TwitterShare to FacebookShare to Pinterest
Labels: Parking

Following a July 18 fire on one of the County’s Champion buses, Montgomery County Executive Isiah Leggett directed the Department of General Services to take all remaining Ride On Champion buses out of service -- permanently.

He said, “We are very fortunate that no one was injured [in today’s fire] and there were no passengers on the out-of-service bus. Staff has been working aggressively to find replacement buses for the Champions. A number of the buses have already been replaced.”

With about 30 buses immediately pulled from the bus fleet, Ride On ran a modified holiday schedule for four weekdays. The modified schedule provides about 80 percent of regular weekday service. The Department of General Services expedited preparing replacement buses and were able to put enough back on the road to restore regular weekday service on July 25. Some minor delays continued until July 30, when a full complement of buses was available for service.

Ride On has put in an order to purchase 28 new replacement buses, which should begin arriving in about a year.

Although regretting the disruption to passengers, Leggett said, “The bottom line is -- removing the buses from service was the right thing to do to ensure the safety of the public and our bus drivers.”